Peanuts for more than three decades! 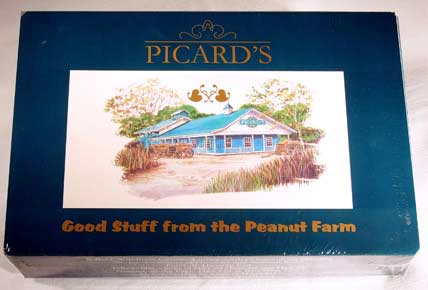 Peanuts were introduced to the Southwestern Ontario’s sandy soils of Norfolk County in 1979, by the Picard Family. Early production had its ups and downs, learning the specialty crops needs and increasing production to a commercial scale with specialized equipment and good farming practices. As with most farming businesses there was great risk and an early frost in 1982, was devastating to the fledgling industry. In the years following the frost, determination and hard work began to bear fruit. The Picard family peanut business focused on value-added food products to advance and expand the peanut business. From the early days of peanut clusters, peanut brittle and beernuts – the product line grew, during the 80’s and early 90’s to over 150 products focused on peanuts and the expanding confectionery product line. With this unique and flavourful expanded product line, retail locations were added across Southwestern Ontario. The now infamous blue barns became the focal point of unique peanut and snack products, direct from the manufacturing facilities of the Picard family.

You’ll find the best quality confections, freshly roasted peanuts – in many flavours and varieties and our unique Potato chip covered peanuts at every location. There are now two separate and unique Picard retail businesses to visit. One style of Picard’s retail business supplies the outlets in  St.Jacobs, Talbotville, Waterdown, Niagara-on-the-Lake, Waterford and Vaughan (2020). The other Picard’s retail business operates outlets in Windham Centre, Fonthill, Morriston, Arva, Woodstock and Fort Erie.  Please enjoy your visit to either style of your local Picard’s outlet, as much as we have enjoyed manufacturing our unique products for your most discerning snacking experience.
All the best
The Picard Family.

Peanuts were introduced to Ontario’s sandy soils in 1979, as a small family farming business.

Many production issues were expected and resolved as one would expect, with any new crop venture, once production became more sustainable, the need for access to consumer markets quickly surfaced. Sales routes, with processed  Ontario peanuts were established  by John Picard, but it was a tough sell with peanuts that were innately more expensive than imported varieties, but a key lesson was learned. The fledgling Ontario peanut  industry was very niche and was unable to compete with the commodity markets that peanuts were typically sold through, so the initial market solution was to process and package freshly roasted Ontario grown Peanuts and sell directly to consumers. The initiative was further reinforced by the early August frosts of 1982. The frost left Picard’s floundering in start-up debt and almost certain disaster. The need for reliance on more than just the Ontario peanut crop was evident. Our marketing strategy had changed – this was the lesson that was learned. To resolve the marketing issues and permit future expansion the establishment of an on-site processing retail outlet in the picturesque village of St.Jacobs was opened. Many visitors to our new outlet we’re introduced to our tasty Valencia peanuts through the St. Jacobs location and the response was overwhelming.

As St.Jacobs took hold, Picard’s introduced value-added products to the Ontario peanut line. In the late 1980’s a production facility was established in the town of Waterford with a 5000sq ft., facility, a former courier shipping outlet. Here we started to process Picard’s peanut brittles, caramels, Pure Swiss Style Chocolate covered peanuts and an ever expanding line of  nut confectionery products. Every year, John Picard, the innovator of a wide variety of these new Picard’s products was charged with the development of the selections that are now home in many of the Picard’s outlets.  As the product line grew so too did the need for more market access, this brought about the opening of Picard Foods second retail outlet at the corner of Highway #3 and Highway #4, in Talbotville. Talbotville was instrumental in providing a path to expanded business production.  The Waterford facility took on 3 more expansions adding 15,000 sq ft., of additional production facility. Additional retail outlets were added in the City of Waterdown and in Niagara-on-the-Lake. A future outlet is scheduled for the City of Vaughan in 2017.

In the 90’s Picard’s products were being continually developed, to assist with the elimination of the threat of frost, Picard’s developed a line of Freshly Roasted Jumbo Cocktail Peanuts, from a smaller farm processor in Florida. The larger quality Cocktail peanut, provided through this smaller supplier, allowed Picard’s to further expand and offer the many varieties of roasted and seasoned Jumbo Cocktail  Peanuts that it now currently offers. Other varieties of peanuts were added including our Extra Large Fancy Redskins and we were even able to find a supply of an older variety - Spanish peanuts.  Formulations were cooperatively developed on the panning equipment of Picard Foods that took dried potato ingredients and covered our Jumbo Cocktail Peanuts to create our unique Crispy Potato Chip covered Peanuts, there  are now 23 flavours available in the retail locations in St.Jacobs, Talbotville, Niagara-on-the-Lake, Waterdown, Waterford (production facility -795 Old Highway # 24) and in 2017 we are opening a new retail outlet in the City of Vaughan, finally providing our unique products access to the Toronto market

Within the Waterford facility, run by Picard Foods,  the confectionery expansion continued with hot process panning which allowed Picard’s to now offer their own varieties of Jumbo Bavarian Beernuts, Golden Honeynuggets, Praline Almonds, Cashews, Pecans, Pumpkin and Sunflower seeds. Our Jumbo Bavarian Beernuts are a favourite in Kitchener celebrations during Oktoberfest.  Chocolate Panning was expanded in the facility of Picard Foods to include Almonds, Raisins, Blueberries, Cranberries, Pecans and the list continued to grow. Three Hilliard chocolate enrobing lines were acquired to facilitate the production of our very popular "Milk Chocolate covered Sponge Toffee”  and many other Pure Chocolate coated products. A Whetstone shell molding line was acquired which permitted the Picards retail outlets to now sell our own manufactured line of boxed chocolates and chocolate bars. Caramel Barns, peanut butter cups, french melt-away mints, buttercreams, big shell turtles, over-sized rum barrels, were all  innovated by Picard Foods within the Waterford facility. Our customers were very excited to experience the fresh and excellent quality of the new Picard’s products.  Picard Foods, took a leap of faith and built a caramel depositing line that was the basis for creating our Original Caramel Pecan Clusters, Bearclaws and Rice Crisp Caramel clusters. A MacIntyre nut cluster line from England rounded out the expanded confectionery line with a wide variety of peanuts and dried fruit clusters. Picard’s was now complete in the diverse confectionery selections that it had to offer.

Things didn’t stop here though, Picard Foods also manufactures a line of premium scoop ice-creams,  in the Waterford processing facility, using premium ice-cream base, the best vanilla’s and the confectionery products from the Picard’s production facility, in Waterford, 18 flavours of ice-cream were developed – our customers rave about our Picard’s Praline’s & Cream – our own pecan butter toffee’s, praline roasted pecan pieces, caramel swirl – makes this ice-cream second to none. We offer our scooped ice-cream from April until September.

In 2006, Picard’s took on another challenge, to further expand the agricultural lands where our Ontario peanuts are grown while looking for alternative uses. We introduced 11 varieties of hops to our farm in LaSalette, this was a first in Ontario,  this could only mean one thing – beer! We started construction of our micro-brewery – the Ramblin’Road Brewery Farm. (www.ramblinroad.ca) in 2010 and opened the production facility in 2012, with the introduction of 3 classic beers, further innovation brought about Canada’s first Potato styled beer with the launch of our DPA (Dakota pearl ale). It’s now our number one seller (at the brewery and through licensee accounts). Since then we have added our PureBred Red Lager, our Unleashed (4-hopped) IPA and very soon will be launching our own very unique "chocolate stout” Picard’s style.  I mention all this because at the Brewery Farm we also manufacture our own line of "Extreme Kettle Chips” including Canada’s only "beer-washed” Kettle Chips –extra crispy, because of the beer. These freshly prepared kettle chips (7 varieties) are primarily available through the remaining Picard’s outlets in St.Jacobs, Talbotville, Niagara-on-the-Lake, Waterdown, Waterford and in Vaughan (2017).  Our great snacks are always available at the Original Manufactured Picard’s retail outlets listed above.  Visit our Facebook page www.facebook.com/PicardsOriginalRetail/  to see what we’re working on daily.